As our aerosol is excellently suited as an extinguishing system for lithium-ion cells, we are already setting the standard with our systems in many areas of application. Whether for production, battery storage, transport or other applications, aerosol is always ideal for preventive fire protection of batteries.

Lithium-ion cells represent a great challenge for fire protection because the flames that occur in the event of a fire reach extremely high temperatures and thus there is a great danger of an uncontrollable spread of fire.

The use of extinguishing water only leads to a successful extinguishing result if an extremely large quantity of water is used. This can hardly be achieved during mobile fire brigade operations and is also hardly presentable with stationary sprinkler systems. In addition, contact of water with burning battery cells can lead to the formation of explosive quantities of hydrogen and cross-reactions of the lithium contained in the cells can result in the formation of highly toxic acids such as hydrofluoric acid. Therefore, the used extinguishing water must also be retained as it could potentially be hazardous waste.

Oxygen-displacing extinguishing agents can only extinguish burning lithium-ion cells to a limited extent, as in the event of a fire they can themselves release oxygen, which makes permanent suffocation of the flames impossible.

Therefore, our aerosol as an extinguishing agent has meanwhile established itself with many well-known users as the means of choice for fire protection of lithium-ion cells.

Aerosol has the following significant advantages for fire fighting of lithium-ion batteries:

1. fast extinguishing success; aerosol generators flood the objects to be protected within a few seconds and thus extinguish extremely fast

2. after the distribution of the aerosol, it has a holding time that can last up to several hours. Possible backfires can thus be deleted again.

3. aerosol does not produce dangerous cross-reactions with the components of lithium-ion batteries

In order to investigate the effectiveness of our extinguishing aerosol in fires involving lithium batteries, we have had a series of fire tests carried out at the Center for Solarenergy- und Hydrogen-Research Baden-Württemberg (ZSW). The results of the extinguishing tests at the ZSW have essentially confirmed our experience:
1. aerosol can extinguish gas flames of damaged lithium cells very quickly and effectively
2. the long holding time of the aerosol helps to permanently suppress gas flames occurring after the extinguisher has been triggered, even over a longer period of time (up to several hours)
3. aerosol can quickly and permanently extinguish burning packaging material
4. aerosol helps to slow down the thermal runaway and reduce the temperature level of neighbouring cells and can thus stop or at least significantly slow down the spread of a fire
The ZSW report summarizes as follows: “…Burning lithium cells could be effectively extinguished. The duration of the fire (open flames) could be significantly shortened by the aerosol extinguisher. It has been shown that the use of the fire extinguisher can prevent or significantly reduce the spread of fire. …“ The thermal runaway was slowed down considerably and in case of larger distances between damaged and undamaged cells, the fast extinguishing success can very probably prevent a spread.

Our extremely compact extinguishers can be used in practically all applications for transport or storage and in most cases can be easily retrofitted or integrated into existing buildings. For fire detection, we can rely on proven components of the fire protection. Whether smoke or temperature detectors and/or a manual release, everything is possible.

Our aerosol fire suppression systems are the best solution for the fire protection of lithium batteries and battery storage rooms. 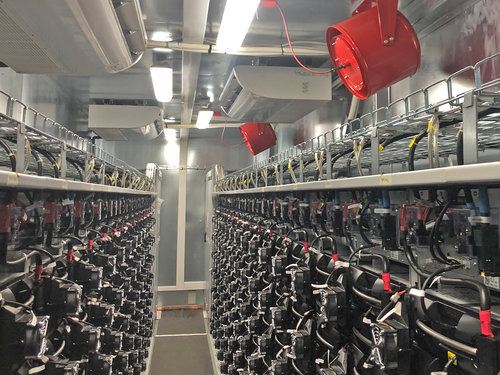 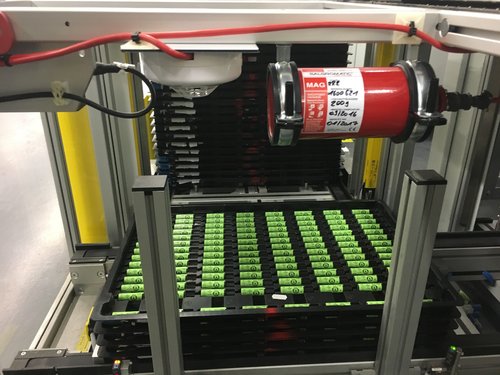 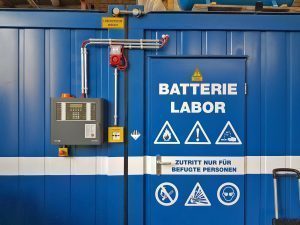 Our aerosol fire extinguishers are recognized by Europe’s number one for fire protection.

Fire Protection for Boats and Ships